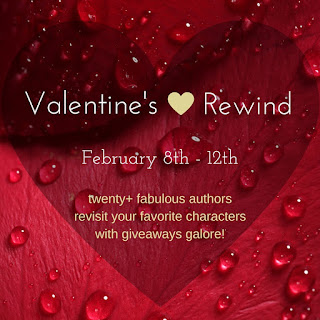 This month, a slew of authors are pulling together for Tamsen Parker and Rebecca Grace Allen's Valentine's Rewind blog hop.

For my part in it, I decided to return to the world of Spice and Smoke and check in on Bollywood actors Michael Gill and Avinash Kumar. It helps to have read that novella, but in case you haven't, the bones of the story are simpler than they appear: Avinash is bisexual and has a flexible concept of fidelity; Michael's a romantic whose devotion is singular.

If you leave a comment on this post, you'll be eligible for a HUGE Blog Hop giveaway at the end of the week, which is pretty awesome!

So, without further ado, here's Smoke and Mirrors:

It still took his breath away that they'd had three glorious years together―okay, bas chohro, glorious if you discounted that Avi had cheated on him twice. The first time had been with his wife, which hardly rated as betrayal. Michael was not one to dismiss his lover's history, to turn his back on Trishna, who was still such a vital part of Avinash's life. He'd forgiven the drunken goodbye to their union almost instantly...and they'd all shared a bed together at one point or another over the months that passed.

Michael did not begrudge his lover his bisexuality, or his need for connection and reconnection with the woman he'd been married to for so long. And if he was careful not to let his hand stray to Trishna's silken skin when they all tangled beneath the sheets, it wasn't out of anger but of respect and a knowledge of his own body's demands. Just as Harsh, Trish's partner, only really needed her, Michael only needed his Avinash. No other bare flesh had the same appeal.

Some might call that stupidity, others naiveté. But Michael Gill had his code, the things he could and could not tolerate in order to live his life and have his career. Avi was Avi, hain na? He had to make concessions. He had to make acceptances. He had to sometimes breathe a woman's spicy perfume in the dark.

But cheat number two had been more difficult. More painful. Zaher jaise. Like drinking poison. And he couldn't think about that devastating time now, when Avi was standing in front of the window and silhouetted by the moonlight. He was beautiful like this. A hairy, naked brute, all sinew and muscle and sheen of sweat.

Michael pushed aside the bedcovers and the troubling memories, padding barefoot across the cool tile floor. He couldn't deny himself. He had to indulge his impulse to touch, to taste. He pressed his tongue to Avi's shoulder, licked salt and inhaled skin. He absorbed Avi's shudder and the guttural noise of pleasure that slipped from his throat.

The handsome superstar gave up trying to light his cigarette, stuffing it back into the pack. “You're not in the middle of my marriage,” he assured, meeting Michael's gaze with blazing dark eyes―and then a sheepish expression. “We're...polyamorous.”
Oh. He knew what that meant. Cheating ka free pass, na?
“I don't like to share,” he warned automatically. He turned to face Avi, one shoulder against the wall. “Especially not with women. Too many cases of straight guys looking to experiment. It's not my scene. Samjhe? Understand?”

He'd known. That first evening on the veranda when they'd locked eyes and traded quips and smoky, gin-soaked kisses, he'd known that Avinash would shatter him. Fool him, he'd thought he could avoid it. He hadn't yet realized that they were inevitable, that this was inevitable. Aaj, abhi, isi waqt. Here, today, this very moment. Curving into each other's arms. Kissing frantically and desperately until it slowed to languid touches of mouth against mouth, lips catching and tugging and sucking. Their hips canted together, their erections rubbing like two sticks sparking flame. Because it was fire between them, wasn't it? Pure, searing, aag that burned away all else.

“Kyu?” Avi demanded, fingertips digging into his hips. “Why are you still here? With me?”

“Because there is no 'without you.'” Michael gripped Avi's hair, pulling his head back with a possessive fierceness as their lips locked once more.

But then Avinash was wresting away, sliding down to his knees. Worshipful. Like Michael was a god and this bedroom was their temple. He nuzzled into the place where thigh met pelvis, kissing and tickling and drawing moans from Michael even before he took his cock down his throat. Then Michael sank into that loving warmth, accepted the stroke of tongue and the wet suction, and his head fell back against the wrought-iron window grate. The warm Mumbai breeze wove around him. The moon cast Avinash's bent form in a glow, tinting his dark curls with silver.

“Don't you believe in love, Avinash? Sachai pyar? Real love?”
The liquor bottle in Avi's hand nearly slipped, sloshing brown booze every which way, but his fingers caught hold of the neck before it could fall. “I stopped believing in poetic nonsense when I was twenty, Michael. When I learned that love can be bought and sold, the price haggled over like fish at market. There's no such thing as 'sachai pyar.' There's just deep trust. Trishna and I have that. You and I could have it also.”
No. No, they couldn't.

Or so he'd thought at the time. But they'd made it, na? The ink on Avi and Trishna's divorce had been dry for six months. Neither of their careers had suffered too badly, as they'd proclaimed to all the Bollywood magazines and gossip blogs that they were “still good friends.” No one was the wiser when Trish and Harsh Mathur went public as “dating” that they'd been fucking for several years with her ex-husband's blessing. And the ex-husband in question...well, he and Michael had done plenty of fucking themselves.

He'd never had a lover so attuned to his body, so attuned to his heart and his soul. They could barely stand to be apart for more than a handful of days. If a film took Avinash to London for a week, Michael was there by Wednesday. If Michael had to shoot in Simla, Avi packed his winter coat and gloves. It was an obsession between them. A madness.

And it had lasted three years longer than anyone had predicted. Player. Playboy. Manwhore. Slut. He'd heard all of those labels in that time―not about him, but about the man who shared his house and his bed. He'd listened to countless warnings that they could never be out and proud, never be faithful, never last. When they held hands and roughhoused in public like typical desi boys, no one blinked. But when they gazed at one another with affection, everyone judged, laughed and placed bets.

Three years were a “fuck you” to all of that bullshit. And a marvel. A miracle. Ek kamaal. They'd had months and weeks and days of passion and need...and of coming so hard that Michael couldn't think or breathe or conceive of anything outside the orbit of their two heavenly bodies. As orgasm broke over him now, he surrendered yet again to his fate and accepted his partner's fundamental nature anew. This was who they were. This was who they would be forever. No one could take it away.

Michael gently stroked his head before trailing his fingers down the lines of Avi's neck and his spine and giving him a blessing and a curse. “I love you,” he promised, for better or worse, as he'd done so many times before. “I will always love you. I will always be your home.”


Thanks for reading, I hope you liked this visit with Avi and Michael! The next stop on the hop is Teresa Noelle Roberts. Be sure to comment on each story to be eligible for the massive giveaway at the end. Thanks for joining us for #ValentinesRewind! ♥ 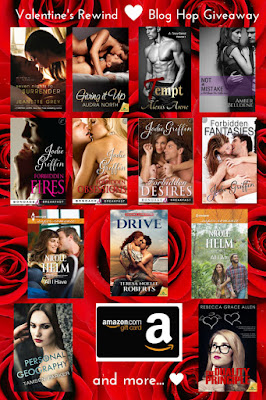