Sexy Sobti. Sexy Singh Raizada. The "sexy" seems to follow Indian soap actor and model Barun Sobti wherever he goes. First winning hearts as Shravan in Sony's Baat Hamari Pakki Hai, Barun is best known for his current role as brooding Mr. Darcy-esque millionaire Arnav Singh Raizada on StarPlus' Iss Pyaar Ko Kya Naam Doon. The Delhi native is also dipping his toe in the Bollywood pool, doing a big screen project with Shenaz Treasuryvala (ex-Rama, One Life to Live)*. Much to the chagrin of his lovestruck fans, Sexy Sobti is off the market — married to his childhood sweetheart, Pashmeen Manchanda. 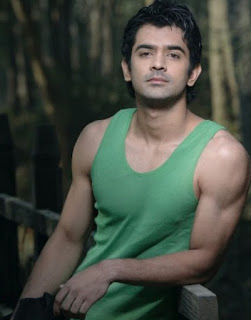 *In a hilarious coincidence, Barun and Shenaz are who I pictured playing two of my Spice And... characters: Rahul Anand and Sunita Khanna. So, it's kind of awesome that they're working together.
Posted by Suleikha Snyder at 1:28:00 PM