Whether it's singing, dancing, kissing, or hitting the sheets, Indian film and television bring their own special masala to the notion of true love. In honor of Valentine's Day, here are five of my favorite moments: 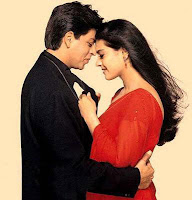 1. Rahul and Anjali's gazebo scene from Kuch Kuch Hota Hai is guaranteed to be at the top of any and every list I make about romance in Bollywood cinema. A simple, beautiful, scene about former best friends from college acknowledging the love between them, it's, arguably, the gold standard. Shahrukh Khan and Kajol were the premier jodi (pairing) of the industry at the time, and their chemistry is as effortless as the love their characters share.

2. Band Baaja Baaraat's wedding planners Shruti and Bittoo take their partnership to the next level after a celebration of their success. BBB was put out by a major production house, but it really feels like an indie: a crisp, well-written trailblazer for the modern Indian rom-com. Anushka Sharma and Ranveer Singh are electric, and you really get a sense of young Delhi-ites and their every day lives...and their not-so every day loves!


3. Arnav untangles Khushi from a mass of pesky twinkle lights. Iss Pyaar Ko Kya Naam Doon is a hit soap opera that's been on for about a year, and it's equal parts comedy of errors and Pride and Prejudice, with a pair from vastly different backgrounds trying to meet in the middle for love. There's no better medium for building — and dragging out— romantic tension than a soap, and this scene brims with it!

4. Khiladi's Raj sneaks into his girlfriend's dorm room in drag (as you do!) for some alone time. Cue a classic Bollywood dance number meant to stand in for more blatant sexytimes. It's a fantasy sequence with multiple costume changes — so very '90s but so very fun and sexy. I've always loved the song, and the video is just delightful, because Akshay Kumar and Ayesha Jhulka's height differential is so striking.

5. The black and white era of Bengali film dominated by Uttam Kumar and Suchitra Sen is probably the golden age of the region's movie industry. "Tumi Je Amar" from Haranoshur is a simple melody and the most basic of scenes but it gets me every time. The tenderness, the intimacy...while we do see moments like this in movies today, there's something to be said for the focus on Suchitra's beautiful face and Uttam curled in her lap.

I hope you've enjoyed this tiny glimpse of the vastness that is desi desire. Please share your own favorite bits of Bollywood — or Hollywood — bliss!
Posted by Suleikha Snyder at 10:45:00 AM