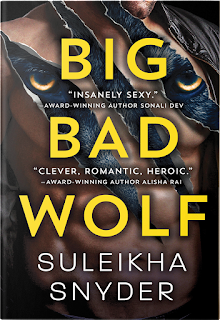 Big Bad Wolf, Book One
Sourcebooks Casablanca, January 26, 2021
ISBN: 9781728214979
Genre: paranormal romance, romantic suspense
Named one of BookPage's Best Romances of 2021.
Named one of Scribd's Best Romances of 2021.
Print/Ebook: AMZ | B&N | Bookshop | iBooks | Kobo
Audio: Amazon/Audible
Joe Peluso has blood on his hands. He took out the mobsters responsible for killing his foster brother, and that one act of vigilante justice has earned him countless enemies in New York's supernatural-controlled underworld. He knows that shifters like him deserve the worst. Darkness. Pain. Solitude. But meeting Neha makes him feel human for the first time in forever.

Lawyer and psychologist Neha Ahluwalia knows Joe is guilty, but she's determined to help him craft a solid defense...even if she can't defend her own obsession. Just one look from the wolf shifter makes her skin burn hot and her pulse race. When a payback hit goes wrong, Neha's forced to make a choice: help Joe escape or leave him to his fate. Before long they're on the run--from the monsters who want him dead, from their own traitorous hearts, and from an attraction that threatens to destroy them. 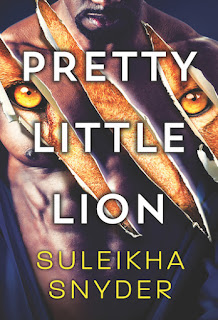 Pretty Little Lion, Book Two
Sourcebooks Casablanca, October 26, 2021
ISBN: 9781728215006
Genre: paranormal romance, romantic suspense
An Amazon Editor's Pick for Best Romances of November 2021.
Print/Ebook: AMZ | B&N | Bookshop | iBooks | Kobo
Audio: Amazon/Audible
Lion shifter and Third Shift operative Elijah Richter has an easy but vital mission: seduce arms dealer Emeric Aston's gorgeous girlfriend, use her as an entry point to the organization, and find out what the global terrorist is planning.
Unfortunately, he doesn't know that Meghna Saxena-Saunders is no ordinary celebrity influencer. She's trained as an assassin and spy, and she has her own reasons for cozying up to Aston. She immediately clocks the mysterious stranger watching her at a VIP party and the two fall into their lusty bed of lies. When their morning-after is interrupted by one of Aston's goons, both of their missions are thrown into jeopardy. Now Meghna must team with Third Shift to cover her tracks and discover the truth before it's too late. 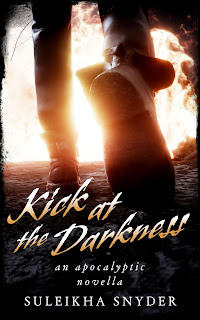 Kick at the Darkness
Suleikha Snyder, November 26, 2021
ISBN: 9798201106713
Genre: dystopian romance, post-apocalyptic/SFF romance
Amazon | B&N/Apple/Kobo, etc
Emran Ali had his life as he knew it ripped out from beneath him—all because pampered princess Mona Sarkar had a crush on him. He returns to her five years later as an embittered zombie hunter. Tattooed. Angry. Determined. But Mona's not that spoiled teenager anymore. She's a grown woman who has seen and lost far too much. And she needs his heart more than his fury if they're going to survive. With a hungry horde of the walking dead literally on their doorstep, Emran and Mona must put the past behind them and fight for their future. 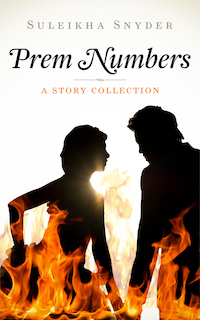 The cocky charmer at your local bar...the awe-inspiring U.S. Vice-President you'd lay down your life and your love for...the mysterious stranger who comes to your rescue one night...the beautiful woman you can't touch, because to do so might literally kill you...the smokin' hot roadhouse bartenders who take your troubles away, only to add new ones. These are the prem numbers. They almost always add up to passion.

In this collection, find previously published stories like "In Her Service" and "The Pick-Me-Up" as well as steamy new material like "She's So Lovely," a small-town ménage set in the same world as Tikka Chance on Me. 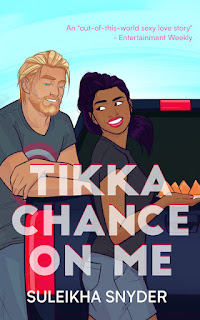 He’s the bad-boy biker. She’s the good girl working in her family’s Indian restaurant. On the surface, nothing about Trucker Carrigan and Pinky Grover’s instant, incendiary, attraction makes sense. But when they peel away the layers and the assumptions—and their clothes—everything falls into place. The need. The want. The light. The laughter. They have more in common than they ever could’ve guessed. Is it enough? They won’t know until they take a chance on each other—and on love. 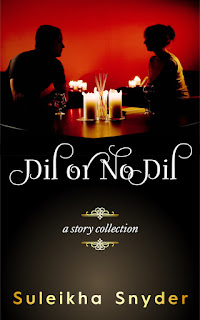 The one who got away. The one you never had. A familiar stranger. A forbidden crush. Sometimes you just don’t know what’s between you until you take a leap. In Dil or No Dil, Suleikha Snyder explores some of the different ways a heart can beat.

This anthology, in the same vein as Suleikha’s 2017 release Ishq Factors, contains some of the author’s most popular previously published works—"A Taste of Blessings," "Opening Act," and "Jesse’s Girl"—as well as brand-new material. 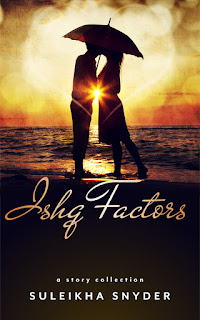 From the past to the future, from hotel rooms to hospitals to homes, passion can bloom anywhere. In this collection of previously released and brand-new stories, Suleikha Snyder describes the many permutations of love, of ishq. 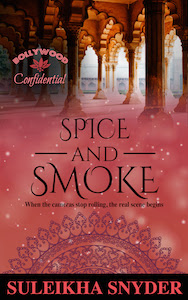 To their adoring public, Avi Kumar and Trishna Chaudhury are Bollywood’s sweethearts. Behind closed doors, their open marriage lets them freely indulge in all manner of forbidden passions. But when costars Michael Gill and Harsh Mathur arrive on the set of their new movie, the sexual temperature goes up exponentially. Trish can’t take her eyes of Harsh, for whom she’s carried a torch for years. Avi’s instant attraction to Michael, however, bounces off Michael’s solid wall of resistance. Meanwhile, ex-boyfriends Vikram Malhotra and Sam Khanna, cast as fictional enemies, are finding it harder and harder to control the very real demons that once cost them the love of a lifetime. 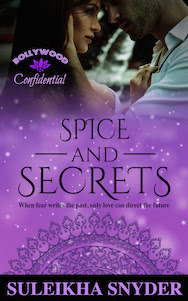 Priya Roy is back in Bollywood with a rock-hard body, a precious gem of a secret and a heart of ice. Producer/director Rahul Anand won’t waste this second chance at his first love. He’ll melt Priya’s resistance at any cost—even if it means returning to acting and negotiating his way onto her next project. Hell, if she’d give him half a chance, he’d write himself into every scene of her life. 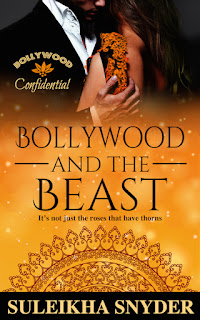 American-born ingénue Rakhee “Rocky” Varma knows a career in Bollywood is no fairy tale, but that truth hits home when her outspoken nature lands her in hot water with the media. Banished to her leading man’s crumbling mansion on the outskirts of Delhi until things cool down, she is wholly unprepared to meet her costar’s reclusive brother, Taj Ali Khan. Taj, a former action hero until a stunt gone horribly wrong ended his career, wears a cape of scars and a crown of rudeness. As his cynicism collides with her determination to stick it out in Bollywood no matter what, sparks fly. 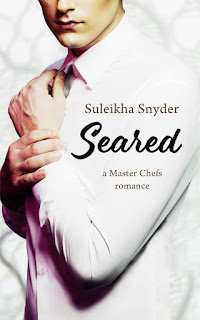 It’s been 10 years since I last saw my stepbrother, Lachlan Christie. In that time, he’s become a famous chef, complete with his own hip and trendy Manhattan restaurant…and I've become the woman who can give him everything — especially my body and soul. But the past doesn’t always stay dead, and we can’t escape it, no matter how far we fly or how hot we burn. I'm determined to win Lachlan and secure us a happily ever after, no matter what it takes — but is love enough to save my master chef?

You can also find Suleikha's short stories in the following Cleis Press anthologies: