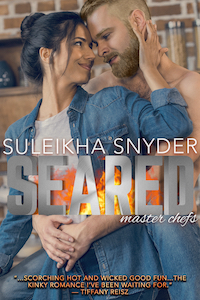 Here are five quick things about this soapy send-up!

1. I released Seared briefly in a much shorter and serial format in late 2015. It was called Unlock Me at the time — and I used a different pen name! I called myself Mariah Kendall Quinn, after three of my favorite soap opera women: The Young and the Restless' Mariah, All My Children's Kendall, and The Bold and the Beautiful's Quinn. I ended up pulling the installments off Amazon and scrapping Mariah, because I honestly wasn't prepared to be self-publishing at that point. You live and you learn! I eventually reworked the story a little, made it longer, and even submitted it to traditional publishers via my wonderful agent. When that particular avenue didn't pan out, I knew I wanted to try self-publishing again — and this time I was ready for it!

2. Lachlan Christie, the DomChefStepbrother hero of Seared, is a pretty blatant homage to Gordon Ramsay. I think the video below sums up why.

3. Heroine Naya Christie is a writer on a German soap opera. While I took liberties with her job duties, because German soaps don't work the same exact way as U.S. ones, I did not pull the idea out of my ass. I was a soap reporter for quite a while, and I was fortunate enough to meet Tom Chroust, the head writer of German soaps Verbotene Liebe and Alles Was Zählt, several years ago. I also interviewed actors from both shows. It was a blast, and I've always wanted to tip my hat to that wonderful experience!


4. There was a really terrible chapter that readers will, thankfully, never see. Let's just say that it involved the kitchen island and butcher's twine. When I was doing revisions this past summer, I looked at it and seriously wondered what alien entity had taken over my body to write it.